There are odd occasions on which sending the same warning to multiple members is desirable and it would be useful to have this facility.

I sent an official warning today, but included the other mods on the message, which removes the warning.

Would it be possible to keep the warning status if the other invitees are mods? What I wanted to do was roughly equivalent to cc: the other mods so they know what is going on. Sending a warning, then sending a second PM to the other mods, then repeating that for any subsequent conversations seems a lot of overhead for a fairly straightforward communication.

Are you using the Staff Notes plugin? That provides links to all Official Warnings that a user has, which allow moderators access. I’ll grab a screenshot once I’m back at a computer.

OK, here we go. Sorry for the delay @JagWaugh:

Screenshot of a topic with a user who had an official warning (circled): 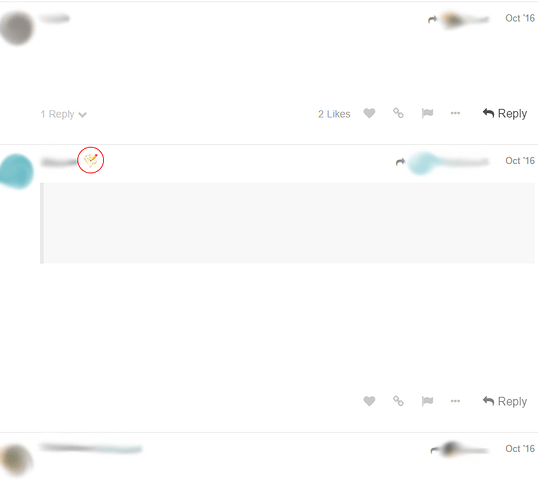 To be 100% clear, that icon and the corresponding UI only appears to site staff. Official warnings are added automatically, any staff user can add a custom note as needed.

We aren’t using staff notes at the moment. Looks like we should be, thanks for the tip.

Summary: Share notes with other staff about a user. Normal users cannot see these notes. These notes are designed for staff to be able to privately note down important information other staff may need to know.

Install: Follow the plugin installation guide. Features The idea here is that sometimes staff members want to share notes about a particular user to help with moderation or support duties. Users cannot see…

I tried on my localhost install. IMHO it worked well.

Two things. The icon is atttached to the member, not any particular post. So if an otherwise good member slips up once in a sense they’ll be “branded” perhaps a bit unfairly. Second, the notes are co-owned by all Staff. That is, any Staff member can delete a note.

In other words - have a good staff that you can trust.