I’m getting a message stating I can’t upgrade Discourse through the Web UI. I saw one other person with this error, but it turn out that person was on the wrong system. While I have no issue upgrading through the cli, I’m just curious to know why I’m receiving this message. 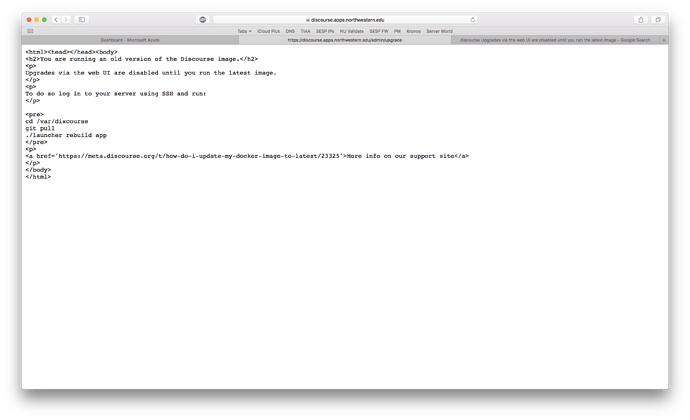 For example, I always update from GUI, after finishing the updates I do the docker restart. When I see that the docker_manager want the update I do that via SSH, skipping the update via GUI, because my site goes offline for a few minutes anyway.

I’m just curious to know why I’m receiving this message.

As you noted, you’re the the first to be confused by this message, but I don’t know what else it could say.

The Docker image has a whole bunch of stuff in it (nginx, ruby, rails, for starters) and sometimes it needs to be updated.

Makes sense. Thanks, and that worked.

I’m running two instances of Discourse and I always upgrade both the same way, which is through the browser. I didn’t receive this message on the other system while upgrading.

Maybe the one that prompted with the command line upgrade did so because it’s running the non-Ubuntu/Azure Linux kernel and the other one isn’t?

My guess is that the one that didn’t ask for the upgrade was installed more recently.

It’s how old the docker container is, not anything to do with the local OS.