What Happens to Posts that are not Approved?

If a post is not approved, do the users have a copy of it some where so they can revise and repost it? Is there a way to find it as an admin and give them a copy if they want to revise and repost?

Is there a way to add a note explaining why a post is rejected?

I once had a similar idea and I presented as a feature. Hours after I posted it, it was added in discourse. Half of my idea though was rejected. The reason why can be found here:

Send notification when a moderator/admin approves a post/topic feature

In my community, I have set the approve unless trust level and approve new topics unless trust level to TL1, which means that TL0 posts needs to be approved. Then, I noticed that many TL0 users didn’t and still don’t know when their post gets approved or rejected and are often getting confused. Therefore, I would like to propose a feature that will send a notification to the user, whose post pending approval and it has been approved / rejected / edited by a mod/admin. Approved: In the notifi…

If you take a look at the topic above, you will understand, why there isn’t any message sent when rejecting a post. It’s like telling someone not to post in the community. That’s something a new user does not expect and should not receive such notifications. There must always be a reason when rejecting a post. Possibly because it does not fit the guidelines of each community or because it is a violation of the ToS. If that’s so, it’s more efficient if you privately message that user and explain to him the reason why their post was rejected and what they can improve, in order to continue posting in the community.

Having said that, if you think that you should explain why you have rejected their post, before rejecting it, copy it and paste it in the private message. Don’t forget that you have the ability to edit the post and then approve it. (That may happen if there is something that doesn’t need to be addressed privately, for instance.

Is there a way to see the posts I disapproved?

What if a user comes later, after it was rejected, to ask why and explain what happened? right now, I have no way of accessing the post.

Hello!
Yes there is go to the review queue. Select rejected and type will be queued post then you can select other options such as specific user. 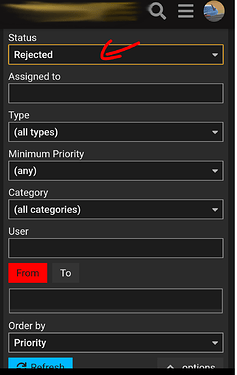 In addition, you can always send the user a PM about their post.

This setting can be changed. Posts that have not been reviewed will be rejected.
auto handle queued age