I just created a new group in Humane Tech Community forum with a ‘humanetech-translators’ title and set a fa-globe flair icon. To ensure it showed up for all members I selected “Automatically set as primary group”. I gave members a default trust level of 2.

Due to this my own flair icon changed to the globe icon. I am also part of the ‘community-team’ group, and want this flair icon to be shown on my avatar (the fa-chess-knight icon). I.e. this group should have precedence to the translators group.

In my profile settings the default title was set to ‘community-team’ before creating the new group and the group itself also had “Automatically set as primary group” enabled from the start. The ‘community-team’ group does not have a default trust level setting.

Besides me there’s one other member in ‘community-team’ that has the same issue too.

Two members in the ‘community-team’ group: 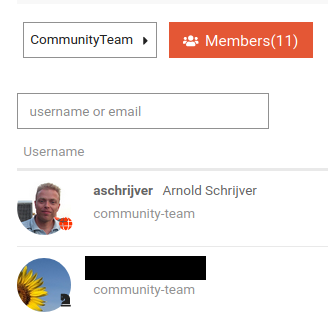 If a user is a member of two groups that have enabled this setting, the group flair that displays will be the one associated with the group most recently joined. It’s also worth noting that primary groups can be manually overridden by an admin on a user’s admin page, or by the user when the user selected primary groups setting is enabled.

I think there is a confusion between “group most recently joined” (which is supposed to work), and “group with flair enabled first or last” (which is not), and also between the profile title and the primary group on the user’s admin page (just below the list of groups of the user).

Yes, this is a confusing interaction of features to me. I even had to very carefully read your 3 lines of text to understand this, and I could not find anywhere a “group with flair enabled first or last” you mentioned.

So summarizing as I understand it now:

I was expecting ‘group flair’ to change according to user account ‘group title’ setting. Isn’t that the most intuitive way for this to work?

PS: Thanks to your help I fixed this for me and the other member. I wait a bit marking ‘solution’ to discuss intuitiveness of this confusing functionality.

sorry about that, it’s only me, I thought it was the behavior you were expecting

.
about title vs primary group, it seems they are of different nature the first one is meant to be anything (when set by an admin) where the second is a group name. I’m not quite sure of the underlying rationale though

I’m not quite sure of the underlying rationale though

Thanks. Maybe @tshenry who wrote the topic you referred to, or someone else on the team might shed a light on that.

I should start by saying we are actively discussing ways to improve the primary group concept, so there may be changes in the not too distant future.

While I wasn’t a part of creating the title and group flair features, I can give an example of why having the two features independent of each other can be helpful, as well as clarify how they currently work.

Let’s say a site has a “Team” group that consists of everyone in the company. It’s helpful to know a user is a part of the team at a glance, so they set up group avatar flair for the “Team” group and make sure all members have the “Team” group set as their primary group to ensure the flair displays.

Team members are broken into different roles - let’s say support and engineering - and are members of corresponding groups. In addition to knowing that a user is part of the overall team, it would also helpful to know what role they have. Given that the site wants everyone on the team to share the same “Team” avatar flair, they can specify a default title in their “Support” and “Engineering” user groups. The end result would look something like this:

I’m not sure if that the best example, but it’s one workflow a site could use.

There are definitely some nuances to both the “Automatically set as primary group” and “Default title” group preferences.

So given all of the above, the order you add users to specific groups can be very important. It gets tricky if you don’t have control over the order a user joins groups, but you may be able to work something out knowing the behavior outlined above.

If there is a specific workflow you can’t achieve and would like to see supported, feel free to create a #feature topic so we can keep it under consideration.

Thanks a lot for taking the time to craft this elaborate explanation @tshenry, really appreciated! For me the issue is currently fixed, and your explanation brings clarity on the mechanism. I’ll mark it as the solution