Just 15 days ago I shared a new Bitcoin and Cryptocurrency community site that my brother was putting together and it’s been an insane 15 days.

The first day that the site was live it saw a grand total of 796 pageviews – not bad, not bad, right? I was impressed but I wasn’t even remotely prepared for what was to come.

You see, the next day the site didn’t see double the number of pageviews or even triple. It didn’t see 5 or even 10X. The very next day the community site clocked in nearly 60,000 pageviews (59,575 to be exact).

Now, I’ve had the pleasure of being part of many online communities and have built a few of them myself and I have never been a part of a community that has grown with this much speed and velocity.

And it’s all because a system like Discourse existed…!! 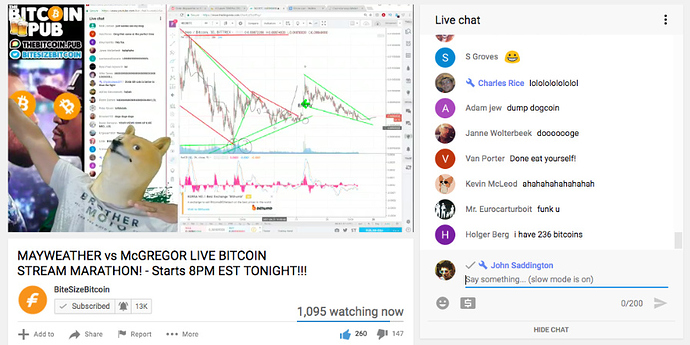 And the momentum is only building…!

It’s still a bit early to know where my brother will take his fast-growing community (powered by his incredibly fast-growing YouTube Channel) but it’s very, very clear that he’s struck an obvious tap-root in two markets that are growing at breakneck speeds (e.g. video and bitcoin/cryptocurrency).

But without Discourse we wouldn’t have been able to pull it off over at THE BITCOIN PUB and I’m so grateful for the software, the team behind it, and the continued support of the larger Discourse community.

This isn’t the first time I’ve put together a Discourse install but it’s the first time where the community is actually working, if that makes sense.

49 Likes
Is there any Discourse based community who reached 100k daily visits?
Which is Better? Discourse or Flarum?
Please visit our Discourse Forum! (Directory)
Minimum Requirements vs. competitors
How to establish a successful forum based on discourse?
How big server do you need if your traffic is 1K user at the same time
Jay91 (Jay Abie) August 28, 2017, 6:13am #2

You guys are on digital ocean, what size of plan you have ?
I mean 1 million is a lot.

Of course, you have a great forum with great content

I’ll have to double-check but I think we are running 16 CPUs already… I’ll get that in a sec (on the road).

I was wrong. Here are the specs:

Awesome. Did you promote the forum somewhere (like Reddit) or how did you get so much traction?

great question. the only place where we actively shared it was my brother’s youtube channel (which I mentioned above).

he didn’t have that many subscribers and we didn’t think many folks would march on over… but, we’ve been pleasantly surprised by how many people were interested.

now, we’re gaining some nice traction through organic search (seo ftw!) but we haven’t built any solid metrics around it quite yet (we need to do that…).

if you have any suggestions, i’m all ears!

I find it interesting that most conversation seems to be chatty, in the sense that people post one-liners in a very talkative, excited, almost euphoric way. It resembles IRC, or the beginning of a huge party that was cooking for a while. Good timing, and I wish you the best for what’s coming. I noted that you (or someone from the community) already started a “90-day lifestyle program”, so I guess you’re already on track for the cool-down period.

Until now the community seems to be quite homogenous: mostly male cryptocurrency enthusiasts…
I wonder where you would put serious discussions about ETH vs. ETC ethics, or energy consumption, and similar topics that would probably require more thinking, and less cheering. Anyway I know a few people that will probably join your party!

if you have any suggestions, i’m all ears!

Hey there. Suggestions for what? Happy to help but I’m not sure what you’re trying to solve.

Just thinking through how to get the word out to broader audiences (i.e. marketing). I’ve never been a fan of marketing and hate most of it. *shrug

I am appreciating the organic search results though…

thanks for that @hellekin! we are so new that it is definitely very chatty. I think we’ll know a lot more about what we’ve got in the next few weeks and months.

retention is something we’re looking at and that’s why we’ve begun a 90-day training program for the community. it’s a lot of work, but, we think it’ll help them stick around and become active long-term members.

Just thinking through how to get the word out to broader audiences (i.e. marketing). I’ve never been a fan of marketing and hate most of it. *shrug

Cool – got it. I have heaps of community growth strategy resources and ideas. Start a discussion in the #community category and we’ll brainstorm.

thanks! I’ve started a new thread:

Unsure if this fits perfectly in this category, but, it is relevant to community-building insofar as without folks showing up you won’t really have an effective forum! I’m not a fan of marketing, in general, but I have lived long enough to know that the Kevin Costner if you build it they will come strategy isn’t a good one… ever. [giphy-downsized] Consequently, I’ve been thinking about how best to market, especially the things that we can do that cost zero dollars. Love to start a large thre…

Just wanted to provide an update…

So, we just celebrated 30 Days… ONE WHOLE MONTH and it’s been absolutely awesome! Here’s a look at our numbers today!

This has just been crazy for us to experience and it’s required us to double-down on finding great moderators and leaders within the community. Every day we’re having double-digit or even triple-digit growth.

This has required us to do much more work on the backend and we’ve had to grow our system in a number of times. Building out a CDN and working on a Load Balancer now are all things that we didn’t think we’d have to encounter within the first month… but that’s where we are!

Again, this community here and obviously the leadership team… THANK YOU for creating something so effective with such little friction! Our community loves the tooling and the software and it’s management of spam, trolls, and the plugin system have been a dream.

Those are impressive numbers. We* run about half that, 1 million page views per month. We also have a lot of search activity, both local and external, since we have a base of over 1.8 million messages posted.

We run our site on AWS, on an m4.xlarge instance (4 CPUs and 16 GB of memory). Storage is 100 GB of gp2 (EBS, SSD). We found, unsurprisingly, that the main trick to keeping performance crisp is to be careful with plugins and to give Postgresql enough room to breathe. We’ve currently got db_shared_buffers set to “8192MB”, so 50% of memory. After a few hours of uptime, that means our system usually settles down with a gig or so to spare. We’re not at all CPU-bound, it’s all memory and I/O.

Good luck with your site!

*) We are Jag-lovers, our Discourse site is at https://forums.jag-lovers.com/

But I am only doing 1.3 million pageviews per month at present…

We’re doing okay. We’ve had some issues when one of the members livestreams… and the entire thing tanks. But, we’ve been working towards adding stuff:

I added the forum to the site in September '15 I believe. I scaled it up a couple of times; I started it with the 2GB RAM/2 vCPU/20 GB SSD.

Oddly only a fraction of people from the main site use the forum, but that just lead to a really nice atmosphere in there

I will be checking out your site soon, as I am interested in crypto as well

Well, mainly just Ethereum, but there are a few other I find interesting

Fantastic! If you have a moment, I’d love to hear (and many others would appreciate it as well) what you’ve learned from running a Discourse system for the last few years… what worked, what didn’t, what did you learn and perhaps maybe how you’ve financed it?