After the last update, I see this:

yet, on /admin/upgrade everything is already “Up to date”:

This can happen for many reasons but just ssh into your Discourse server and ./launcher rebuild app … there are many support topics actually.

I know it doesn’t really matter and that the system is updated.

How do I know? Because I just DID a ./launcher rebuild app and STILL it shows beta12 needs update.

So, no, I’m afraid you haven’t solved the problem.

I have also noticed this.

It looks like the version bump tag was applied to a commit on master (as normal). But that commit hasn’t moved across to tests-passed yet.

Once the team fix their internal build, everything should be back to normal

@david any action needed from our side ?

“Me too” on this latest beta13 update. Is it because there’s also a docker update (git pull just brought some new stuff down)??

Note that in order to even start my update, I always need to put my current IPv6 address into my CloudFlare whitelist. They really seem to distrust that one-click update script for some reason.

But once it’s updated and confirmed, heading back to my Admin panel and it still says we’re out of date. Doing a rebuild after the git pull to see.

Edit: A full launcher restart after git pull didn’t help either. Something’s up with this version?

@David_Taylor any action needed from our side ?

I don’t think so. The team don’t tend to work weekends, so I expect it’ll get fixed on their end on Monday.

Is it because there’s also a docker update

I think it’s just a git tagging issue, see my post above.

I thought I was getting this because I was running Ubuntu 14.04. When I went in SSH I received the docker upgrade message. I just upgraded to Ubuntu 16.04, manually upgraded Docker, rebuilt Discourse app, and still getting the message.

On the bright side, it forced me to upgrade everything to the latest versions.

Same thing here. I was afraid my “git situation” was broken or something (I had made some very minor local changes to the commits, but finally reverted everything to normal together with this update). Good to know it is not me.

@neil looks like we need to do some more bumping

I just did a clean manual install of Discourse on a new DO droplet. Same issue. 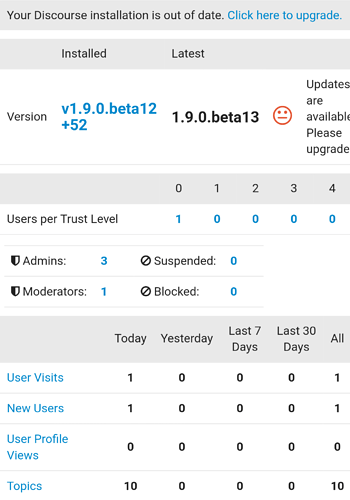 Apparently the tag didn’t take. Will have to do it later unless someone else on the team can tag it.

The tag is there, but the commit it’s attached to has not moved to tests-passed because the build is broken.

Ok @tgxworld can fix the build his Monday which is USA Sunday.

Our build server was skipping the job to update our tests-passed branch which has now been fixed.