I made the following post on the DxO forum with respect to a change in the product today. I am glad to see that the same problem does not afflict your forum!

"While editing a post today I noticed a “forum unavailable” flash and then when attempting to make later changes (I keep putting there instead of their) I discovered the editing box had become very tiny.

Is that especially for me to stop my long posts or is it general to the forum!?" 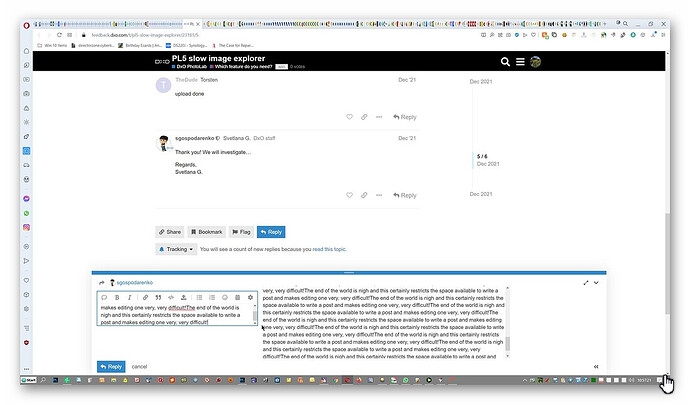 Is that especially for me to stop my long posts or is it general to the forum!?"

Is this an ongoing problem, or something that happened once? Maybe the forum went down momentarily and caused a temporary issue?

If it’s an ongoing problem you can try visiting the site in safe mode. If the problem is gone at that point, there may be an issue with themes or plugins added to the site. If the issue persists in safe mode, it may be a Discourse bug.

Kris (@awesomerobot) others on the site have been experiencing the same problem, clearing caches etc. had no effect and the problem is across a range of browsers. The problem started this morning while I was typing a long post (again!?) and in the middle of writing the post I attempted to check on another post and momentarily got a “not available” screen! I returned to my in progress post and completed it succssfully and posted it.

However, I then spotted some spelling and grammar errors and when I went to edit the post I found the tiny box to enter the text!

One user also reported “I’ve noticed that visiting a topic and then going back to the root level of the forums doesn’t always mark the topic as read. That seems to have started this morning when text box size issue started”

At a guess the site started behaving in the way that it is after an update.

I am glad to see that the same problem does not afflict your forum!

As this appears to be an issue only affecting one site I have moved it over to #support.

But hopefully it has resolved itself in the meantime.