These days, I have setup(*) a Discourse instance in German for a relative and her non-English-speaking community. Even though I chose German as default language in the new setup wizard, the default categories and topics have been created in English (despite having an existing translation, as far as I can see): 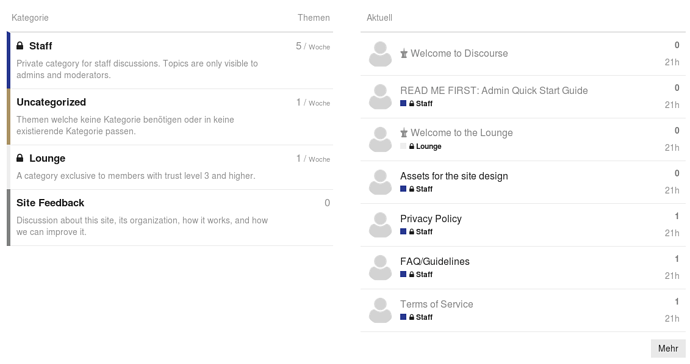 Did I miss any step? It would help if there was a way to recreate the default content (if unchanged).

(*) = which worked pretty well using this guide in less than 30min on a Hetzner vServer CX10 (I used to prefer STRATO V-Server Linux V20, but they don’t seem to support Docker/AUFS)

You need to set the language in app.yml before you start the Docker container the first time.

Unfortunately not. The wizard runs once Discourse has already started up, so the choices you make in it are equivalent to configuring the site settings yourself. You will still need that setting for now. Having said that, I do think it would be possible to regenerate those fixtures via the wizard. We should revisit at a later date. Can you elaborate? Is the idea that in some languages upper case is more common, and the setting should change it depending on locale?

You need to set the language in app.yml before you start the Docker container the first time.

That makes sense. However, as far as I can see, the ./discourse-setup step (as explained here) will generate the app.yml and start Discourse in one step.

Maybe a solution for this would be to ask for the interface language within the ./discourse-setup dialog?

Update: I have created a PR for this: