Continuing the discussion from 'Your post contains words that aren't allowed' … but which ones?:

'Your post contains words that aren't allowed' ... but which ones?

Next steps are we need a “substitute” action in Watched Words, perhaps next month sometime?

Could the “substitute” action for watched words be expanded to remove email signatures that an admin can manually add to Watched Words?

This to me feels like a job for the reply trimmer and it does it automatically already.

It does, but still some get through - and usually the same ones.

Here is an example of two posts by the same user, with his email signature highlighted: 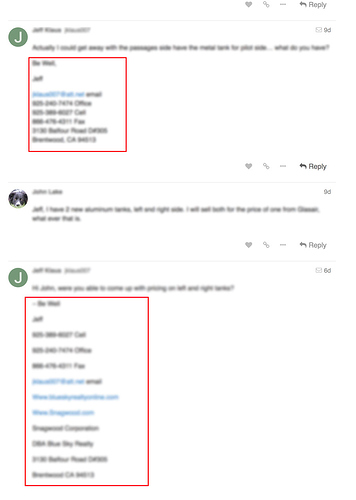 It does, but still some get through - and usually the same ones.

Oh @zogstrip needs a raw copy of these problem emails, this is something we fix as we go.

The Usenet standard RFC 3676 specifies that a signature block should be displayed as plain text in a fixed-width font (no HTML, images, or other rich text), and should be delimited from the body of the message by a single line consisting of exactly two hyphens, followed by a space, followed by the end of line (i.e., "-- \n" ).

This latter prescription, which goes by many names, including “sig dashes”, “signature cut line”, “sig-marker”, “sig separator” and “signature delimiter”, allows software to automatically mark or remove the sig block as the receiver desires.

Worth nagging the user about this if they don’t. But then users will put in Comic Sans signatures, so there is no god, and we are all ultimately being digested by an uncaring cosmos.

Most of the time nagging is futile because the typical offender is not savvy enough, or seldom visits the forum, thus does not see the effect.

blocking the signature would send the message loud and clear

How would you block it?

Edit: Ah, I see what you mean. Maybe.