Migrate a XenForo forum to Discourse

For the 5k posts, and about 600 attachments, on an older xeon and an SSD disk it took about 10 mins. I would grab a reasonably powered box, do the import offline, and let it chug away.

Fantastic! Looking forward to it.

Ok I’ve done a very quick test and the additions to the script seem to have worked - doing a proper test now with a few thousand members and 100K posts. Will report back if it works…

Hi, anything new? If you need help with testing, I will be glad to help

I’m getting an error that users table doesn’t exist when I run the xenforo script. Any help really aprreciated!

Reading about this for an hour but haven’t figured it out yet.

There are some variables at the top of the script that you need to fill in so that it can connect to your xenForo MySQL database and query the data. I believe “import_db” might be the placeholder value - double check that those values are filled out correctly.

@Ghan I thought I’m importing to import_db with this: mysql -u root -p import_db < /shared/db.sql

Ah ok. If that is your database name, then check to make sure you have the table name correct. Your table might be xf_user with the prefix, and that would cause an issue. There should be a TABLE_PREFIX variable in the script as well.

Right now, I’m still stack on the import script.
It iterates through users and categories all good. On the import_posts function though it just hangs there until after some hours it times out.

Starting debugging this by just printing the values in the import_posts: 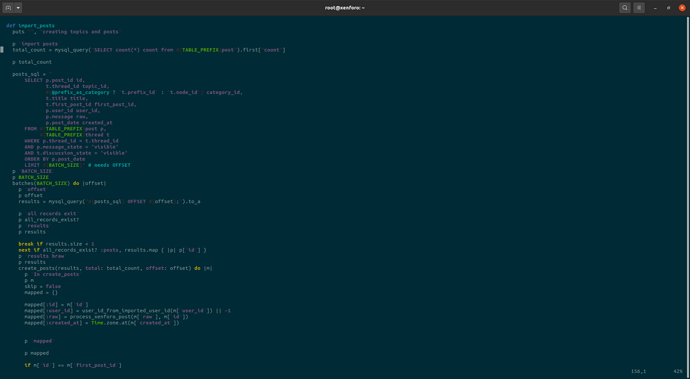 All prints after the assignment of the results variable never print. 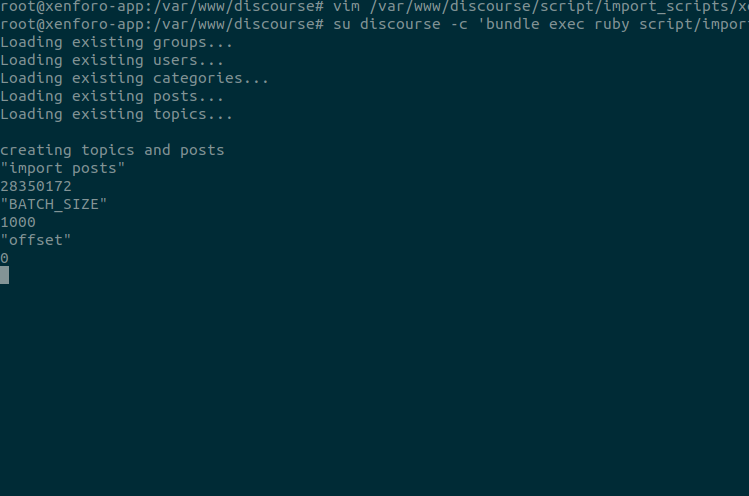 Just in case anyone is looking to import a vb3 forum, this guide might help if you also have a Xenforo licence:

Writing this up while it’s fresh in my mind - it’s currently a work in progress so make sure you test it and ensure that it meets your needs. There isn’t a vB3 to Discourse importer as far as I know, and I don’t have any vB4/5 licences which I think the Discourse importers are for - but I do have a Xenforo 1.4 licence and there is a Discourse importer for that! For those that don’t have a XF licence, you can often buy them on the second hand market, or, you could ask/pay someone to do the impor…

Does this importer import tags from xenforo along with the threads they are attached to?

Always a good idea to look at the source code.

I think the answer is … yes (but not super familiar with Xenforo data structures):

So, it looks like it at least once imported some tags for someone under some conditions. If you’re lucky, it’ll work for you too!

Is it safe to set up my trust levels, badges, other discourse settings before the import? I’m thinking this importer will just insert/replace posts/threads/profiles? I’d hate to get everything set up in discourse settings and have this wipe out those settings, even though I don’t immediately see anything in the code related to that.

Is it safe to set up my trust levels, badges, other discourse settings before the import?

Yes, but make a backup. You will likely need to change things and run it multiple times, starting over from scratch,so keep a backup of your configuration with no imported data.

It inserts. It mostly doesn’t replace anything. If a user exists, it won’t change it. It won’t use categories that you set up. If you run it again, with an updated database from your old site, it’ll add new data, but not change things that were imported on earlier runs. This makes it much faster, but if you need to change the script for some reason you’d need to delete it all and start again.

Second, does it import attachments before or after the posts? Because looking at the script it looks like it does it after. It’s just a bummer to have to wait 4-5 hours just to find out the attachments didn’t import.

Everything is dependent on the data before it,for the most part, the post-processing can take advantage of the multiple cpus, but that doesn’t start until you’re done, for the most part. Get a single cpu that’s faster.

You can modify the script to import only recent uploads, but if you’re not planning on doing major development, if just wait the 5 hours.

Well, I’ve tried this several times now and the attachments aren’t getting imported, and I’m running out of ideas. I’m hoping someone can help me (thanks @pfaffman for your input so far).

I’ve run the script, and every time (after about a 4-5 hour wait), all posts with attachments/photos show the old bbcode from xenforo ([ATTACH]123456[/ATTACH]) and I don’t see any pictures or attachments in the discourse install.

What could I be doing wrong here? I feel like I’m 90% there, I’m just missing something.

You’ll have to look at the code. Is the attachment code even running? Are your attachments on the format the script expects?

But there are a bunch of things that could be wrong from you not configuring it correctly to it just not working with your version of zenforo. You’ll have to look at the code and add some debugging output to see what’s going on.

Well, just FYI for anyone coming across this thread, I was not able to get the attachments to work with this script, no matter where I placed them. IMO the script needs work and the instructions especially need a lot of work to be more clear about what goes where and how.

Until then, I would consider this script to be broken.