Automatic Actions based on Words found in posts

New for 1.9 is the ability to take some actions based on watched words found in a post.

There’s a max of 1000 words per action. In practice, “bad word lists” I found rarely contain more than a few hundred.

* can be used as a wildcard.

Found in Admin, the navigation is similar to the settings.

By default, the words are hidden. Checking the “show words” checkbox will display them and allow you to delete them. Using the search field will also reveal any matching words.

25 Likes
Keyword filtering
Actions on Watched Words
Automatic actions for tags
Moderator notification if someone used censored words
Warning on keywords?
Profanity and watched words
Any Autolinker solution for Discourse?
Is there an "automoderator" feature/plugin within Discourse?
Actions on Watched Words
Minor mod to Automatic Actions based on Words Found in Posts
Advice on getting users to use the post template
Spam filter on message content keywords?
Automated Discobot Replies
sam (Sam Saffron) July 26, 2017, 7:20pm #2

For staff it would be kind of weird to require approval by same staff member.

Staff posts bypass these checks, but not TL4.

We should definitely move this into Logs, as in “Screened Words” (philosophically speaking, that’s what we’re doing, right?) I don’t really think this deserves its own top level grouping.

Thank you @eviltrout! Super useful for languages like Finnish.

There’s no way to use this with PM’s, right?

(There is potential in our group for someone to PM fraudulent instructions for wiring money, so we might watch for the words “wire” and “ABA”.)

I’d recommend adding those words to ‘flag’ as this covers both PMs and public topics.

This is not working for me. I’m testing by posting in a public category- not a PM. Blocking and Replacement work. Flagging and Require Approval do not work- the post appears immediately, and nothing shows up on the Review Queue.

How are you testing it? Some of these filters don’t apply to staff users (admins and moderators).

[EDIT]: It does work if I follow the prompt and enter a replacement string of either “example” or “https://example.com”. But not with mixed or markdown. Is there any way to support mixed or markdown?

I’ve decided to use the “replace” action. I would like to replace a watched word with a url, so the watched word becomes a link to a warning. This seems like a nice solution because it doesn’t require moderator action.

But the replacement string does not get displayed as a link- just as raw markdown. Thinking that it might not be cooked properly, I tried “Rebuild HTML” and that had no effect. 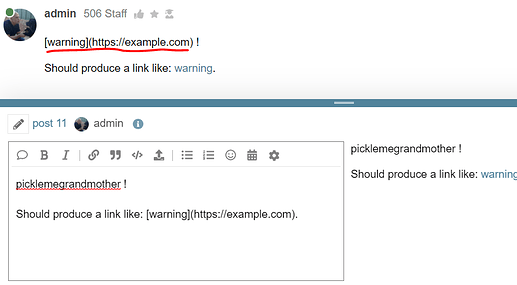 Posted the request in #marketplace.

What would you like done? Currently the Automatic Actions based on Words Found in Posts feature can accept a replacement string of either simple text or a url, but not a combination of text and url. I would like to use a markdown link as the replacement string: [warning!](https://warning.example.com) and have it display as expected: warning! However it currently displays as: [warning!](https://warning.example.com) See screenshots. Maybe it’s not getting baked or something. If at all poss…

Hi all,
Looks like this is obvious, but for some reason I can’t find this Watched Words in my discourse instance:

image1157×294 10.2 KB
Do I need to enable it somewhere? It’s missing currently. It’s a fresh install. I’m setting it up and wanted to apply some basic moderation settings, but I can’t find thi super useful feature…

Please help! My Discourse is 2.7, my own docker installation setup with your awesome guide.

The watched words are now located in admin > customise

Thank you very much!

Image is updated, thank you.