Discourse Encrypt is a plugin that enables private, encrypted messaging between end-users. All sensitive information is stored securely on the server and is encrypted and decrypted only on the client-side.

Three easy steps to use this plugin:

Note: user was prompted for password again because encryption was deactivated (by logging out or explicitly deactivating it from preferences screen).

How do I install it?

Basically, edit your app.yml file to include the command specified before.

This plugin gives users the possibility to communicate securely through Discourse, by using an end-to-end encryption scheme. Most of plugin’s logic is implemented on the client-side and the server-side handles only public or encrypted information. It does not encrypt any post metadata, such as names of participants in the conversation, posted time, likes, small actions, etc; uploads are encrypted, but their presence is not because the system must associate uploads with posts to prevent deleting them.

The whole code is open-source and security enthusiasts are welcome to review it. For any further information, do not hesitate to contact me or the team.

The goal of this plugin is to offer integrity and confidentiality of the encrypted contents, and to protect it against information leaks and unauthorized users. The following sections describe the usual operation mode, used algorithms and threat models.

To use this system, users enroll once by generating a “user identity” consisting of two 4096-bits RSA keys, one for encryption and another for signing. Users can export their “identity” for safe keeping or store it on the server, encrypted after generating a paper key. These two methods serve as backups or are used to enroll new devices.

Paper keys (inspired by RFC 1751 and BIP-39) are human-readable keys that are used to securely store the “user identity” on the server. A paper key consists of 12 random words, picked from a list of 2048 words, offering 121-bits of entropy (the first word is used as a label). To encrypt the “user identity” with a paper key, the system will first derive the encryption key using PBKDF2 to stretch the paper key into a 256-bit AES-GCM key.

To create a new post, the user (their browser) will: 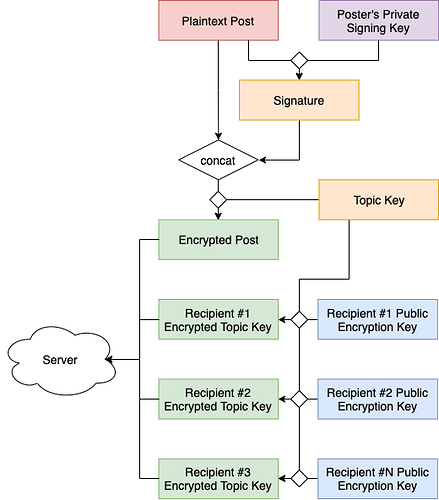 The pseudocode for the encryption operation would be something like:

To read a post, the user (their browser) will:

This plugin makes extensive use of the cryptographic primitives implemented in Web Crypto API, which are available in any of the modern browsers Discourse supports (except Internet Explorer).

The system uses a set of primitives built on top of those provided by the browser via Web Cryptography API.

An attacker which can inject code could in theory access encrypted information by serving malicious code, which decrypts the encrypted content and sends the plaintext posts to another server. To make this possible, it is enough to have access to an administrator account and create a theme component with the malicious code.

Default protection mechanisms such as CSP can detect and mitigate Cross Site Scripting (XSS) attacks that could also represent a way of injecting malicious code.

In Man-in-the-Middle attacks, the attacker intercepts the communication between the user and server, giving them the ability to read or alter it. Because the plugin encrypts everything before sending, an attacker cannot decrypt anything by simply eavesdropping. Similarly, because information is authenticated the attacker cannot alter it.

However, the attacker could serve malicious code back to the user and follow a similar attack to the one presented in the previous section. This is partially mitigated by HTTPS, which is considerably reducing the attack probability.

The plugin already has a little history and that can be seen while browsing the source code and noticing the two implementations of the protocol v0 (initial, alpha-beta release) and v1. Protocol v0 is no longer used to encrypt new posts, but kept to continue decrypting old ones. New protocol includes authenticity of the ciphertexts and all posts are signed with the private key of the poster.

55 Likes
PMs are accesible by admins if the admin has the link
Notifications but not emails
What to do if your Discourse is compromised
Spoiler for certain user groups?
Can true private messages be implemented?
nexo (Alex) March 4, 2019, 11:09pm #2

Definitely something I‘ll try out …

Not unless they have the passphrase to access your keys, no.

A malicious admin could compromise everything from the server up though. You can’t trust a system any more than you can the people running it.

This makes it much harder for admins to read user messages. The messages themselves are encrypted in the DB with this plugin. So yes, the threat of “random admin decides to snoop on PMs” is vastly mitigated here.*

You still have to somewhat trust admins not to mount an attack, as they still have the ability to inject arbitrary scripts via themes. But it is much less trivial to do.

You still have to somewhat trust admins not to mount an attack, as they still have the ability to inject arbitrary scripts via themes. But it is much less trivial to do.

Although arguably if they can inject code to intercept the passphrase they can already also read keypresses in the PM.

Indeed. Maybe it‘s necessary to implement a code validation mechanism for this plugin and important messaging components to ensure, admins and users have independent 3rd-parties that validates the source code.

Very true. The short term plan here is to try and get feedback from security professionals about the underlying protocols and patterns used.

We want to ensure that as long as admins are not fussing with JS payloads stuff will remain safe.

Long term if this gets popular someone can ship an electron app which ensures only validated JS runs or a browser plugin that takes care of that.

Anything which keeps it mobile friendly gets my vote.

I have the PHI/HIPAA conversation very regularly where Discourse is concerned. Looking forward to having more of the boxes ticked.

Long term if this gets popular someone can ship an electron app which ensures only validated JS runs or a browser plugin that takes care of that.

Maybe some day, the official Discourse app will do the same.

Especially due to the iOS limitation of sending/receiving push notifications, it would be interesting to integrate a messanger inside that app. Something that feels much more native.

Notifications are available to hosted customers. You can also deliver notifications to iOS using the single-site app and OneSignal.

If anyone wants to have a play with this plugin you can try it out at: https://try-encrypt.discourse.org/t/how-to-try-out-discourse-encrypt/11

If you want to also add me to the test a message feel free to add @sam, but fair warning I am unlikely to bother checking it and emails are disabled here anyway.

Instead it should be

If you want to also add me to test a message feel free to add @sam, but fair warning I am unlikely to bother checking it and emails are disabled here anyway.

I’ve been using this a bit before it was talked about here. Found it in the repo and been playing with it.
I’m not an expert but I think so far it’s great. This helps security and privacy conscious sites a lot!

Is there a way to “reset” a user so they can reconfigure their password if they forgot it?

I’ve looked a bit and am not finding it. It’s pretty funny cause it’s a staff on this test site and I’m like … good job making a dumb password you forgot. lol

AFAIK no, if they lose the passphrase to decrypt their key the key itself is lost.

What about reset as in burning the key and making them generate a new one knowing they won’t ever be able to access their old messages?
That should be safe as far as “resetting” goes at least it is when it comes to keysystems in general?

Like allowing the user to disable and reinstalize encryption and keygen if they lose that password. It would always have to come at the cost of lost data but it wouldn’t lock a user account out of ever using e2e. Probably on list but not currently implemented.

The users and staff on my test server running this however love the simplicity of how it currently is. Thanks to the dev and team for this work!

I have mixed feelings about this one. On one hand, it would be great if users could actually reset their key in case they forget it. On the other hand, reseting the key will lead to losing access to previous encrypted messages. This is definitely a dangerous operation and there would be no way of going back.

Wouldn’t having that feature also introduce a lot of complexity to private messages? (i.e. You see all messages in the private messages list but you can only access these X messages since you changed your key). Could create some solid usability issues long-term if people lose their keys or need to change them regularly in that it won’t be clear what messages you have access to or don’t.

Would it help to follow a pattern of an industry where encrpyted private messaging is already a thing?

In healthcare it’s quite common for doctors of various disciplines to use an encryption product on top of their email service. They aren’t actually sending encrpyted email though, it all lives within a web app that integrates with their webmail.

So, much like a discourse PM, when an encrpyted message is sent, the recipient only receives a notification stating that there’s a message awaiting collection. Providing they remember their password, they can visit and read any messages with one additional credential challenge.

In the event the password is forgotten they can request a secure message password reset, which requires approval from someone else at the practice. Nobody at the practice can reissue access unless the client has first requested a reset and confirmed said request by clicking a link in a message sent to their account email.

We’ve already acknowledged that if the site has been compromised by a malicious admin that there’s very little that can be done to mitigate from such attacks and this is no different, the process could be keyed against the email address to prevent someone reaching into the database and changing the associated email address. Unfortunately that wouldn’t do anything to prevent a determined bad actor from intercepting the message to get at the link and they could even go so far as to block the message in-transit.

Because we’re using per-topic keys though, that would mean needing approval from a participant of each encrypted topic, wouldn’t it?