Well, the group is visible at least to admins and owner(s)

BTW even with these settings 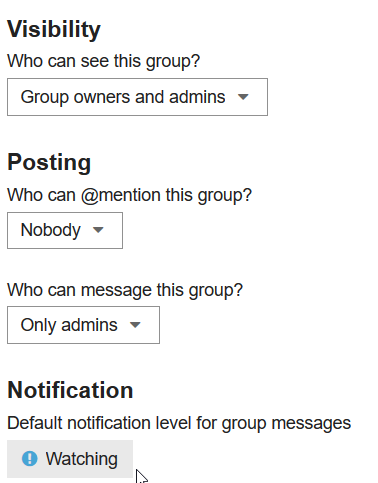 I can send messages to a trust_level group.
After an hard refresh (ctrl + f5) you will see the Message button appears on the top right 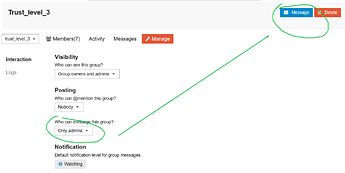 Is your instance updated? Do you have any third-party plugins installed?

Thanks for the excellent screenshots! Is the group message button something in the 2.0 release or has it always been there? We’re running a custom frontend, which could explain why I’m not seeing the Message button. But that wouldn’t explain why I’m not seeing the group in the editor. On 1.9, so I’ll have to wait to get to 2.0 before I can say we’re current and we can rule out version issues.

Did anything change with 2.2? Because mentioning @admins in a PM would trigger notifications for all admins in the group, this no longer works on my instance (I have everything enabled in the settings). Tried on another set up, same result.

Or am I going crazy and this was never the case?

Yes, this behavior changed in 2.2. Admins are only notified about mentions in a PM if they were invited to the PM – either directly or via a group they belong to.

We changed this because there were numerous complaints by admins and users that notifying admins about mentions was an unexpected behavior if they were not invited to the PM.

And they do it frequently too.

Ugh, more dev money wasted. Can this be recovered via a plugin?

I guess you should be able to change it via plugin. Here’s the relevant commit: FIX: Notify only invited users about mentions in PMs · discourse/discourse@5640166 · GitHub

Would be nice if this was a setting, vs. having it removed completely. Hopefully, future releases take under the consideration that lots of complaints don’t mean everyone.

Thank you for your help, will forward this to my dev.

Just get them to use flagging, or the invite button, plenty of options

I already have custom plugins that heavily rely on that feature, and I’ve literally just taught my community to tag @admins over the past two months. I guess I have to revert this somehow with a plugin.

The thing is that while everyone here understands that admins can read PMs without an invite there are many with the illusion of privacy who assume that only named participants can see the message.

That said, it would make sense that tagging a user or group in a PM would notify the user who tagged them that they don’t have access to ask if they wanted to invite them, right?

The thing is that while everyone here understands that admins can read PMs without an invite there are many with the illusion of privacy who assume that only named participants can see the message.

That said, it would make sense that tagging a user or group in a PM would notify the user who tagged them that they don’t have access to ask if they wanted to invite them, right?

Not arguing there, and it makes absolute sense what you’re saying. The issue lies with removing something that was once a feature with no way of keeping it as a setting. I understand why users tagging users in PMs was a bad idea, but how many times do people type @admins in their PMs (without needing help) to where this was a problem? To me it was a great and convenient feature where users could simply type @admins help and boom, we got notified.

But, it is what it is, can’t complain as overall Discourse is great. Just got sucker punched with this today and it ticked me off, as I’ve noticed lots of users tried to flag us over the past few days and it didn’t work. I guess I should read the release notes better with next updates -_-

I think that’s the point in contention here. You saw it as a feature which meant it was a conscious design decision instead of a consequence of other decisions.

On group messages and who can message a group, if the Group setting is configured for only Admins and Mods, should non admin and nonmods in that group be able to reply back to the group? Or just to the original sender of the group PM?

Yes, they can reply back. They simply can’t start a message to said group.

What I mean is that the group will appear in the search that appears when you type “@…”, and if selected e.g @private_group, it will still be rendered with the grey mention box. So to the user, they just mentioned the group. However, this doesn’t actually trigger a notification because of the “Who can @ mention this group” setting. So the user is confused and frustrated when they never get a reply from anyone in the group, because in their mind, they mentioned the group.

It feels like the visibility settings and posting settings are too tightly coupled. I’d like to allow everyone to know that a group exists, and see its members, but be unable to tag it. I.e. it seems like the “Who can @mention this group” setting should be able to disable mentions on groups entirely, not just the triggered notification.

Example:
Here are the settings for a group called “coaches” 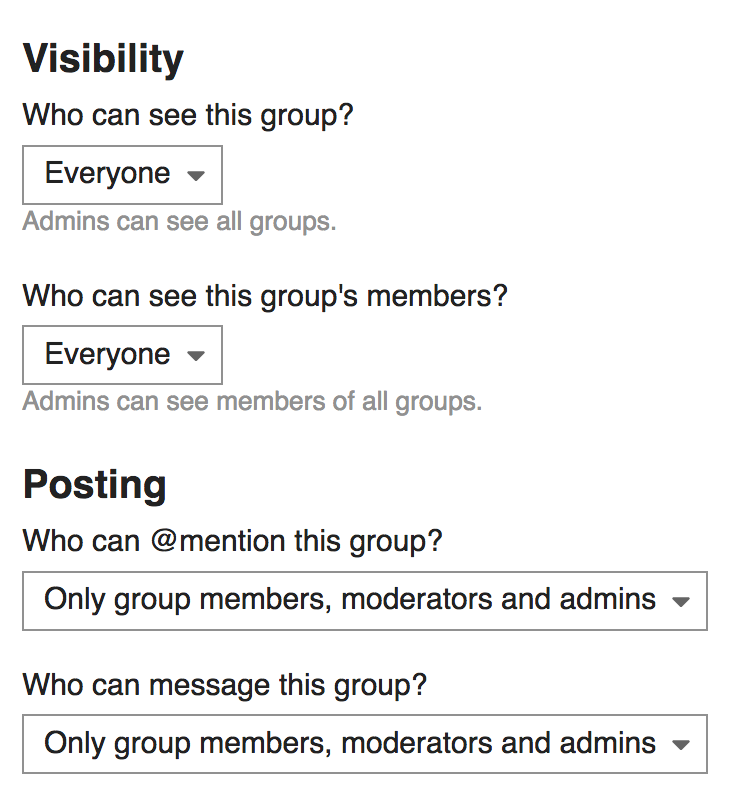 From a non-staff account that is not a member of the group, it still appears that I can mention the group:

However, on a different account that is a member of the group – no notification is triggered. So, I guess I what I’d love to see is a more powerful “Who can @mention this group” setting to actually signal via UI clues that typing @private_group isn’t actually a mention.

Looks like this was specifically changed back in December by this commit:

@zogstrip the PR explains what changed but no link to why. Do you remember why we changed it?

This commit includes public groups in autocomplete and also wraps group mentions in a link as long as the group is visible to everyone, even though the group is not mentionable.

Meaning we can auto-complete the group and have it appear as a link we can click on in the post even though it’s not a mention.

I guess the JIT message is wrong in that case since the group won’t be mentioned.

We could also tone down the mention look in that case so it still looks clickable but kinda different to a mention?

The JIT message is indeed a bug and we can fix that.

I am wondering if the commit was a good idea. Maybe it’s better not to show a group since you can’t mention it? I saw that comment explaining the feature I was just curious why we decided this was a good thing to do.