So you want to install a plugin on your Discourse instance? Great, let’s get started!

Use an OAuth token to install your plugin

We first introduced OAuth2 tokens in the GitHub API starting in v3. Unlike usernames and passwords, OAuth tokens provide additional benefits: Revocable access. Tokens can be revoked at any time from a user’s settings screen

This way you can install your plugin in the same space as any other and you don’t need to create an ssh key.

An alternative method to install private plugins can be to use SSH keys. However, for most instances, OAuth tokens is the preferred method.

The common way is to use ssh to login into the server remotely. cd is the “change directory” command, and /var/discourse is the directory to change to (once logged in). 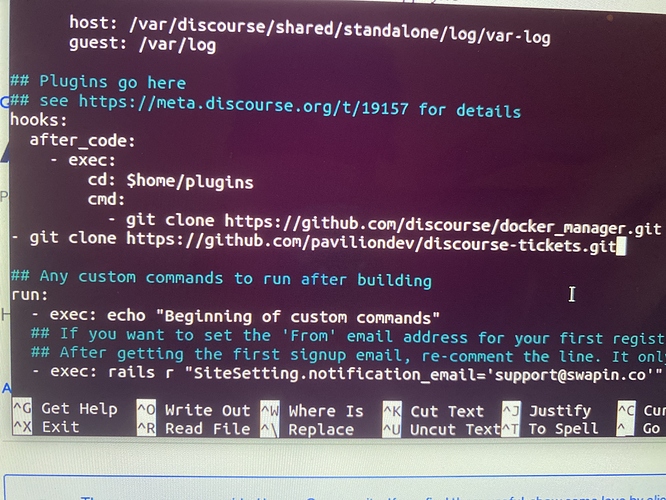 Done is it right the git clone url under the gitclone docker url ?

Done is it right the git clone url under the gitclone docker url ?

Yes… but you need to give it the same level of indentation.

@techAPJ maybe we should point out the indentation in the line:

And add the text with the spoiler plugin git clone line included?

And if I may add something, don’t use the Tab key on your keyboard, in the app.yml always use space

I go a step further and say to always copy an existing line and replace just the url.

maybe we should point out the indentation in the line

don’t use the Tab key on your keyboard, in the app.yml always use space

always copy an existing line and replace just the url.

What is the best way to install a specific version of a plugin?

Let’s say the version of Discourse is not the most recent, but not terribly out of date. And the app.yml definition for the plugins using the git clone [plugin repo] to always get the latest plugin. But the plugin has changed or has breaking changes with the older Discourse version.

I feel that I’m probably not the only one to come across a situation like this and I am not looking for technical support, but more so wondering:

There are potentially two ways to solve this:

I clone from a branch of a plugin all the time in my work to test new features.

Both of these approaches have their overhead, so I would suggest trying to update your instance as the best option.

In general, it would be really great as a plugin developer to support Stable, Beta and Tests-passed on an ongoing basis using different branches, but that would mean some significant overhead, especially when starting to get into back porting of features, bug fixes etc., so I have avoided this so far. Perhaps when I can write plugins with the keyboard slung behind my back I might start doing that